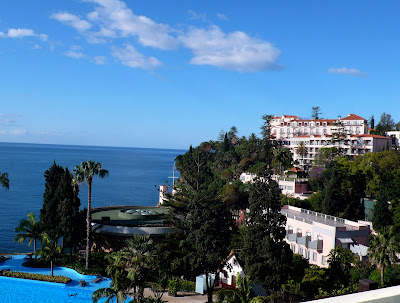 Every day from our hotel we could look back a little way along the coast and see the famous Reid's Palace Hotel, created by a Scot, William Reid. He was born in Kilmarnock, one of twelve children. He was not a healthy boy and at fourteen years of age his father, a farmer, gave him five pounds and told him to seek a more congenial climate. William arrived in Madeira as a cabin boy in 1836.
The island was becoming a place for the wealthy to stay for periods from three months to several years. At first William and his wife earned their living in letting out local quintas to the rich visitors. Later in life he bought a rocky outcrop of land on which to build his hotel but died before the project was completed in 1891. His son, also called William, took over the business and the hotel became a venue for the rich and famous. Flying boats would bring the visitors to the island.
In 1936 the hotel was bought by the Blandy family, famous for Madeira wine, and now it is owned by the Orient Express Group. The hotel lobby is decorated with wonderful period posters from the glamorous 20's and 30's. 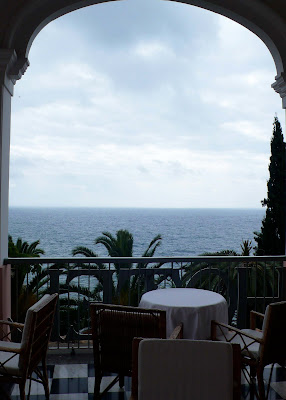 THE thing to do in Madeira is have tea on the terrace at Reid's. The hotel is very British in period style, and as you can see, on the day that we visited, so was the weather! 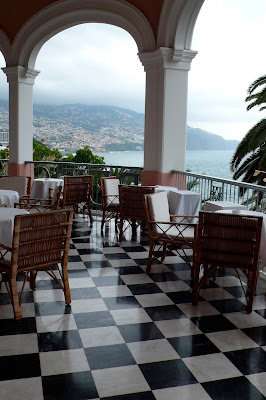 We were disinclined to sit and watch the grey clouds swirl, far better to stroll about the hotel's interior, to look at the photograph's of previous visitors, Winston Churchill, George Bernard Shaw, and to gawp in admiration at the beautiful floor and the mural painted on a wall of silver leaf in the bar. 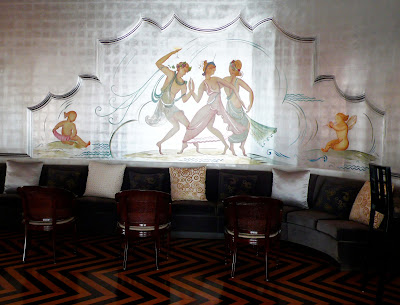 Soft, pale carpets, bowls of flowers, comfortable sofas and chairs.
I shall only return to Madeira if I am allowed to stay at Reid's Hotel! 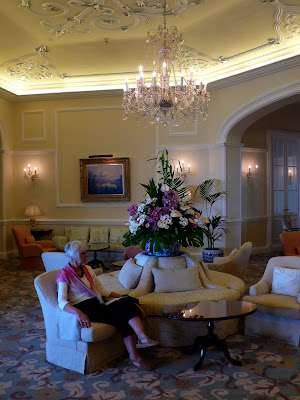