St Agnes' Eve - Ah, bitter chill it was!
The owl, for all his feathers, was a-cold;
The hare limp'd trembling through the frozen grass,
And silent was the flock in woolly fold:
'The Eve of St Agnes' by John Keats, written in Chichester in 1819. 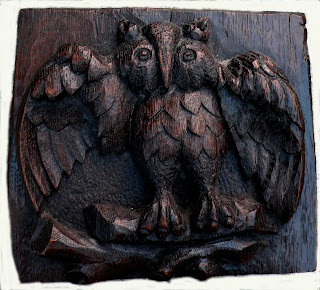 medieval wood carving, one of a pair.
(Bought in a junk shop for £5!)
It is St Agnes' Eve , and after a clear night and a full moon, although the sun shines, there is an extremely heavy frost, just the same weather that Keats was writing about in 1819 in the opening lines of his poem.
I love the sound of owls, last night they were hooting from the woods beyond our garden. Sometimes in the summer I stand outside and call to them, although these days I never seem to get a reply. Perhaps I've lost the knack.
My brother reared a tawny owl, seen with me here in the process of growing out his fledgling down. He would fly lazily about the garden and nearby cricket pitch in the daytime. In the evenings, when we had both been banished, me to bed and he to his pen, I would lean out of my bedroom window and hoot to him and his beautiful, melodious reply would come floating across the orchard. 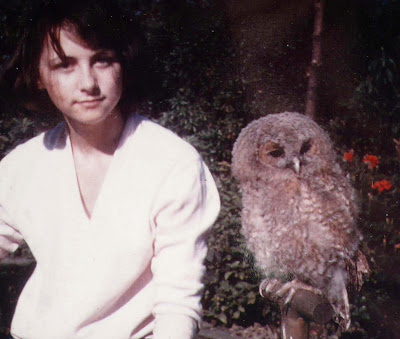 Himself sometimes puts an owl in his carvings, silently watching from a corner or gliding through the sky. 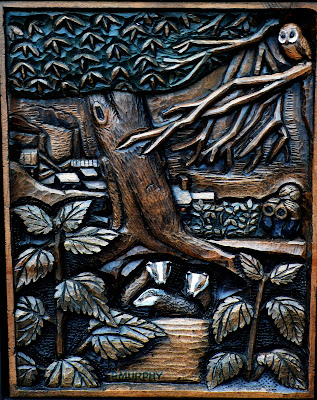 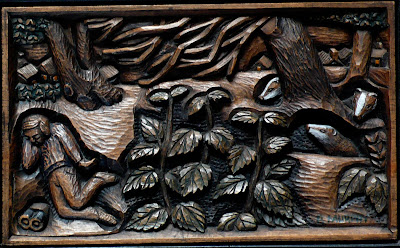 Badger watch 2. Limewood bas-relief carving by Peter Murphy.
Hall's Dictionary of Subjects and Symbols in Art.
Owl. Associated with Athene (Minerva) in ancient Greece where it is found on the reverse of coins bearing her image. From this it became a symbol of wisdom, which Minerva personifies. It is a common attribute of the goddess, perhaps perched on a pile of books. As a nocturnal bird it is also the attribute of  night personified, and of sleep.
Posted by Share my Garden at 02:17