Between last weeks bitterly cold and icy weather and todays fresh fall of snow we had a small window of opportunity  in which to move the building work forward. 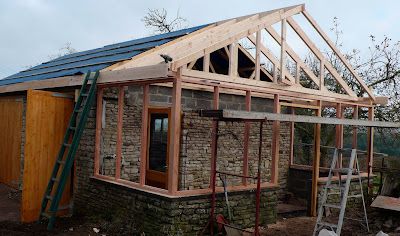 I became, rather belatedly, concerned that the tiled roof would be too dark for my plants so we went on a search for some double Roman reclaimed glass tiles. What a palaver - they are as rare as hens' teeth! We contacted any number of reclamation yards, they had twelve here, three there, and the price varied as much as the quantity available. Eventually we found two suppliers with a good supply and went to look at their stock. I should have taken my camera because there are always curious things to be found in these yards, along with a whole load of junk. But I was in serious bargaining mode,  cash in pocket,  stout gloves and boots on ready to pick out what we needed, so my camera was forgotten.  We selected forty tiles, filthy from years of use. 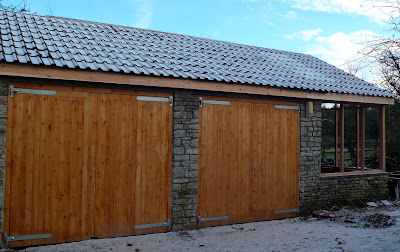 The tiles must be at least one hundred and fifty years or so old. They are filthy with the soot of industrial England, the dirt is almost etched into the glass and it is proving extremely hard work to get them clean. They are being placed in two panels to throw some extra light onto the back wall of the greenhouse section. 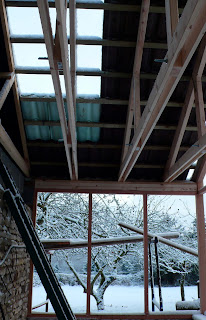 We bought our tiles from Frome Reclamation where we had an interesting chat with the owner. It was fascinating to hear where his supplies had come from, and to learn how far they will travel onwards from his yard. We looked at his stock of flagstones, with thoughts on what we might do once the garage block is finished. He had beautiful, and very expensive, Yorkshire stone slabs, some from the small town of Holmfirth, in the West Riding of Yorkshire, (where they filmed "Last of the Summer Wine") which were due to be shipped out to Versace in America.
Several years ago Himself layed a wooden floor in our dining room and hallway, reclaimed oak strips, two and a half inches wide. They were originally from the USA, the Harris Company, from Roanoke, Johnson City, Tenn.  It looked no better than a bundle of firewood when we bought it, but once layed, sanded and polished we were delighted with the result. Himself was rather excited that the wood might formerly have been used in some exotic bordello and went back to the reclamation firm to ask the provenance. The wood is marked with signs of its former life, cigarette burns and stains. He was told that the flooring had come from a working mans' club in the north of England. Fantasy shattered! How we laughed!
But the snow has put a halt to building work once more; it's too cold to mix mortar for the ridge tiles. How frustrating! 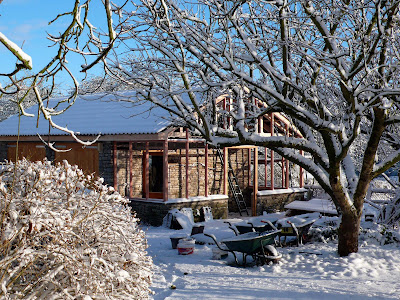 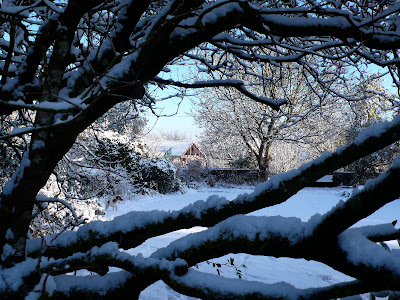