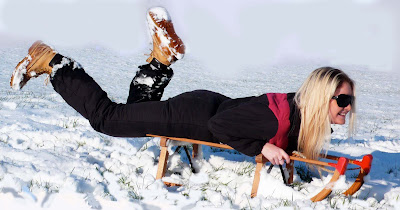 The poet, Tess Kincaid, of  Life at Willow Manor has asked for a response to the  image of a her beautiful wooden sledge.
Magpie Tales 44.
Sledging Haiku
My childhood delight
Over the crystalized ground
Exciting as flight

Snow Madness
A day off school and children come,
dotted, like wasps in autumn, all about the hill.
It is still early, and breath streams from open mouths
like messages in smoke
voices ring out and people laugh and joke.
Well wrapped, high on the hillside,
rapt attention to the run,
all ready for the challenge, for the fun.
With wooden sledges, plastic trays,
strung out in convoys, voyaging alone,
all shapes and sizes and with one intent
to sledge the slope, to move with speed and grace,
to reach the distant hedgerow, win the race.
And, should they flounder, fall or leave the track
it doesn't matter, they will just climb back,
repeat the pattern, ride compacted paths of ice
and scream with joy and fear.
Snow madness rules the children on the hill.
When darkness falls they play there still. 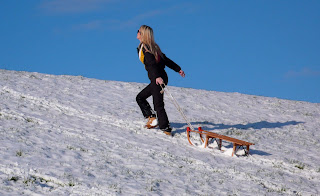 Felicia sledging, Dec. 2010
My brother is three years older than me and when I was young I was allowed to go beyond the garden only if I went with him. This implies that he was responsible, but really , he was reckless.
He had a high box sledge with metal runners which he could control very well on his own, lying on his belly, but when we both sat on it the sledge was erratic and threw us off in all directions. Sometimes we lay like a sandwich on top of one another, but this usually resulted in me being left half way down the hill, covered in snow. I was always out, tagging along with him and his friends, a gang of wild boys, half exhilarated and half terrified of their antics. They had snowball fights with other, older boys and made trains of tied-together sledges which careered downhill, banging into each other, causing spectacular pile-ups. One of these resulted in my little finger being run over and  broken. I liked it best when my brother let me sit on his sledge whilst he pulled me home.
My parents had a weekend cottage and family friends would come to spend a day with us in the country. It was a great place for fun and the grown ups would play games and be just as silly as the children. My father had a long wooden table and benches made so that everyone could comfortably sit and eat together.
One winter when the snow was very thick my parents carried the table out into the back field, turned it upside down and announced that we would all sledge together! My mother sat in the front and the children and our boxer dog sat in a row behind her. My father stood behind like a bob sleigh runner and pushed on the table legs. When the table started to move the dog jumped out. I expected us all to rocket down the hill, the way that I always did with my brother, but the table just glided over the snow in a very gentle fashion and every now and then my father had to jump off and give it another push.
Sometime after that I was given a wonderful Christmas present, my own sledge. It had scarlet metal runners that swept up at the front to create a steering bar. It was light and responsive and moved like the wind. Now I was allowed out with my own friends and my sledge gave me years of fun.
The last time that I went sledging was when my daughters had a day off school due to heavy snowfall. They had a plastic tray-like sledge with side handles and we took it to the nearest steep field. The hillside was filled with people and several runs of hard, polished snow had already been established. We climbed to the top edge of the field and my girls had several speedy rides downhill.
"Have a go, Mum!" they said. "It's great!" So I got on the blue tray, confident of my sledging skills, and set off. The thing was uncontrollable. It veered  off at an angle and crossed the path of all the other downhill sledgers. I was terrified and crawled off at the bottom of the field with shaking, wobbly legs.  When I had managed to climb back up the hill I found my daughters still laughing.
"You're a disgrace!" they told me. "You caused chaos!" I've never sledged since.
If you ask me which is my favourite sledging memory, I'll say it was when all the family sat together on the upturned table and hardly moved at all.
Posted by Share my Garden at 08:23