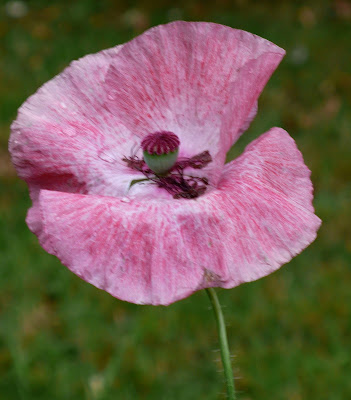 In 2003 the Imperial War Museum in London produced an exhibition, 'Anthem For Doomed Youth, twelve soldier poets of the First World War.' The exhibition included an audio programme with the voices of Siegfried Sassoon, Robert Graves and Edmund Blunden, extracts from letters and diaries and the music of Ivor Gurney. Film was shown of a young soldier, seemingly paralysed, until the word, 'bomb' caused him to leap up and try to hide beneath his bed.
It was one of the most profoundly moving exhibitions that I have seen and it prompted me to write the following poem.
The Soldier Poets.
I read the notes today
and letters.
"My own dear mother," Wilfred Owen said.
Small sheets of yellowed paper
spider's writing, all,
and hard to read.
Edward Thomas has picked flowers
and Siegfried's statement
seems far too polite.
There is a curl of hair preserved.
Medical evidence, on screen
a soldier aged nineteen
is paralysed
and blind and deaf to everything
except one word,
"Bomb"
and dives beneath his bed
a broken boy.
I'm pleased to hear that Rupert
had a lover warm and brown,
a Tahitian beauty,
that life, though short, was sweet and full of colour for a while
before the poison lip, the drifting into death.
There are reports from Craiglockhart
and in his sketchbook David draws dead rats.
There is the word, "Asleep",
a telegram,
letters to friends,
the longing to be home.
Here is the map stained with young Grenfell's blood
who used to shoot for fun
both hawk and dove.
And it is true they all had grace
and hopes and love of life,
could hear birds sing above the noise of battle
could make sweet music even while in hell.
We should not lose to warfare
young men such as these
but listen to their words and learn and grieve.
Feb. 2003.
In 1915 my relative, William Leishman was granted compassionate leave to return to Scotland where his mother was dying. He arrived too late to see her, the funeral was taking place and the women of the family, who at that time in Scotland did not attend funerals, washed and fed William before he returned to his company, the Queen's Own Cameron Highlanders, in France. He died a week later, on the 25th September on the first day of the Battle of Loos.
In the Second World War my mother's much loved older brother, Bob, was the first medical officer appointed to the First Royal Marine Commandos. Like William, he was also  given compassionate leave because his mother was dying and returned home just too late to make his farewells. There was real concern in the family that the cycle would be repeated, but Uncle Bob survived the war unscathed.
My father was a stranger to me by the time he came out of the army. It didn't help that he thought I had been left to 'run wild' and was in need of strict discipline!
But it wasn't long before he became the most loved and trusted person in my life.
The Bell Tent.
When war was over
and Dad was free
and came back home
to live with me
he bought a bell tent from the army.
Other people thought him barmy.
Huge and dark the space within
where we could play and make a din,
run rings around the central pole,
emerge to sunlight like a mole
from dark brown canvas, flattened grass,
odour sweet as memory has.
No thoughts from us of men at war,
boots to the pole, heads to the door.
On holidays away we went,
dogs, parents, children in the tent.
My mother could not sleep inside
unless the door was open wide,
and several times we'd start the day
with a cow's face or donkey's bray.
We'd climb up hills and gaze around,
our tent a little mole-hill mound beneath,
and way up in the sky
we saw a golden eagle fly.
No thoughts from us of those poor men
who'd never see this land again.
Posted by Share my Garden at 07:33