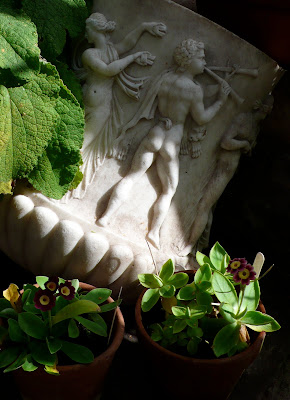 I've brought my pots of auricula into the greenhouse for winter protection and they are thanking me by giving a second flowering.
I love auriculas, they seem to have quite definite personalities, sitting up straight, head erect, very controlled and decorous but then giving such a blast of exciting colour. They were brought to England in the sixteen hundreds by the Huguenot refugees and there are now over two thousand named varieties in cultivation in Britain. 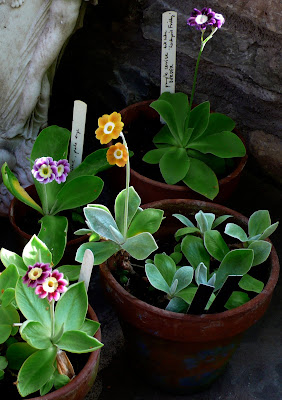 They are traditionally displayed in a 'theatre', a series of tiered shelves with an overhanging roof which protects the plants both from rain damage and from excessive summer sunshine. (Ha ha, this is England!) 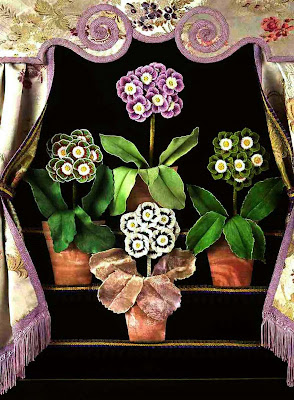 Auricula Theatre. Hand embroidered silk raised work by Janet Haigh
When I visit the Chelsea Flower Show I always go and drool over the auricula displays. The pots are presented in perfect order, often set against a backdrop of black velvet so that the colours of the petals  stand out dramatically.  I take a notebook and list the names of the plants that I would like to own. Some of the names seem inappropriate, such as 'John Wayne' for a beautiful flower of pale pink shading out to crimson. Other names sound decidedly old-fashioned but seem much more suitable, 'Norah', 'Peggy' and 'Pauline' and neat little 'Mrs L. Hearne'. I've been searching for 'Yorkshire Grey' for years without any success, having read of it in a book, 'Auriculas for Everyone' by Mary Robinson. I'm a Yorkshire lass and grey is a favourite colour, so what could be better? 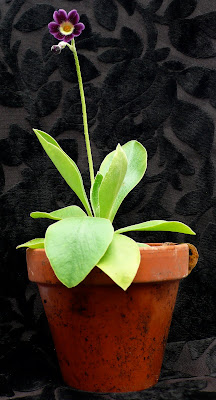 But in the meantime I'll enjoy the un-named varieties that are flowering so beautifully for me now.