We met the Shooter on Friday when we were out gathering the pine cone branches for decorating. He is a pleasant and interesting man, it is  always enjoyable to stop and talk with him. He told me he had shot well over seventy squirrels since October. I told him that he hadn't shot the ones who like  to eat walnuts because they had stripped our entire tree of its crop the minute the nuts were ripe and ready for me to harvest. He said he had caught most of the squirrels in the area of the sweet chestnut trees where we had been gathering the branches. "Yes" I told him, "just up from our house. They come up here for dessert!"

The  Shooter showed Himself the gun, from Czechoslovakia, the same make as the one that shot Ronald Reagan. He loaded his ammunition and demonstrated the range and power by shooting into a distant oak tree. "That will blunt someone's saw in years to come," was the response from Himself, but we were both deeply impressed by his marksmanship. He described the lift that he had to calculate to compensate for the fall of the bullet over the distance covered. I hate and distrust guns, always recalling from childhood  a girl of my age who lost the use of her legs because her father had left his loaded gun in the hall of their farmhouse.

Yesterday was a dull day with quite a strong, cold easterly wind which carried the faint sound of the shooting syndicate at play in the woods. In the afternoon we turned on the sauna and stretched out in the welcome heat. While we were there the head of the shoot left a brace of pheasant hanging outside the kitchen door, two fat, male birds. Delicious! What handsome birds they are. We've hung them from a beam in the conservatory, they will stay there for a few days for the flavour to develop. 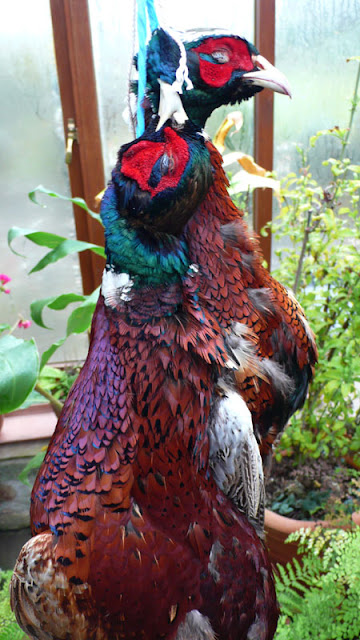 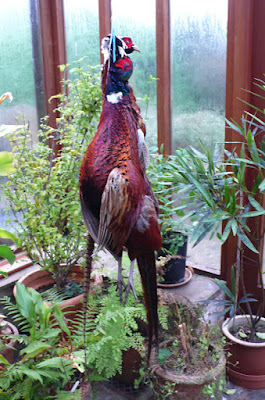 No good keeping the meat for our elder daughter to share when we collect her from the London train at the end of the week - she's vegetarian!  (Perhaps because she spent her formative years helping us to pluck feathers!)

No wind today but very low light levels and a damp and swirling mist that makes the garden look rather mysterious. Behind the topiary yew tree is the bare-leafed walnut tree. You can see how large it is, quite a task for the squirrels to strip it of so many nuts. 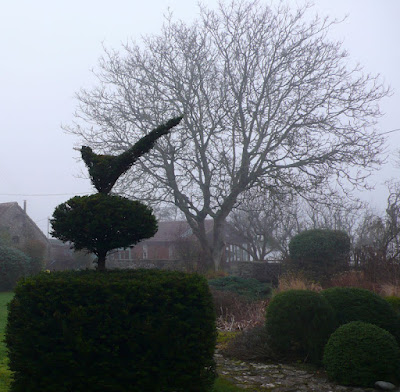 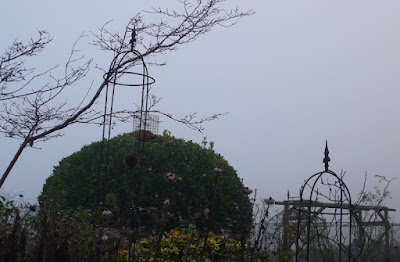 Even at this unlikely time of year there is still some blossom to be found in the garden. 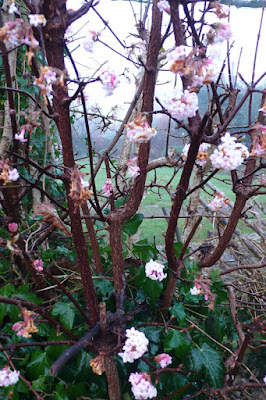