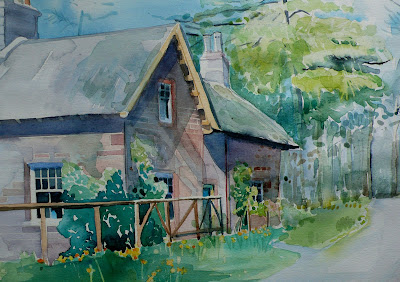 There is a wedding today on Vancouver Island. The invitation, which we were unable to accept, sits on our mantelpiece. I would like to be there because it is a link to some of the happiest times of my childhood.
My aunt and uncle, the bridegroom's parents, lived in rural Scotland in one of the most carefree homes that I have known. (My 'aunt' was not actually a relative but my mother's dearest school friend.) 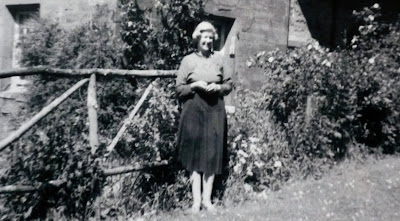 My cousins and I were free to roam about the countryside at will, climbing trees, playing in the river, cycling around the estate or into Auchterarder for a banana milkshake - the height of sophistication!

It was the sort of home where carpets were rolled back for dancing, where any boots that fitted, from the jumble by the back door, were fine. It was a household that has influenced my adult life in my choice of  home and surroundings.
My aunt's house no longer exists. A bird's nest in the chimney caught fire and set the thatched roof ablaze. I visited the area a decade ago, recognising the exact place only by the large monkey puzzle tree that grew on what had once been the lawn.
This week, Sharie, the bridegroom's sister, sent me photographs that she had taken last month. The monkey puzzle tree has died and nature has totally reclaimed the land; there is a carpet of ferns where we used to dance at Hogmanay, rowan trees have sprouted where we wolfed down buttered toast at supper time, after playing out of doors all day. It is both heartbreaking and wonderful and makes me feel as though I have taken part in a fairytale. 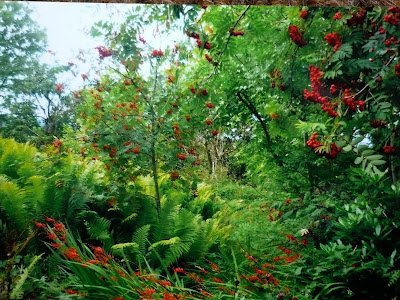 I remember todays bridegroom as a small boy and fishing fanatic, with a tin box that held his treasured fishing flies. Sometimes one of them would get tangled in his red school socks, and, believe me, they did nothing for the state of his socks! 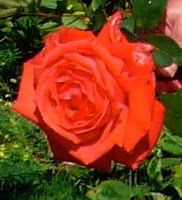 Last Saturday there was a wedding in our village with a marquee erected in the neighbours' garden. Rain came hammering down in the early morning. The Italians think it lucky if it rains on your wedding day. We were married on St. Swithin's Day and could hear rain bouncing off the roof during the church service.

But as we came outside as Mr and Mrs the sun shone. Himself, who is rather sarky, says that it's been shining ever since!
The bride-to-be came, under her umbrella, to have her makeup applied by Jane of shesnoplainjane.

I popped across to join them as I was wanting to photograph the bridal flowers. "No flowers," said the bride, "I wouldn't know what to do with them." 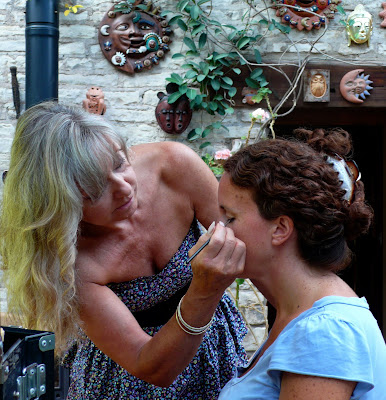 NO FLOWERS! Not a good enough answer for Share my Garden, and I went home and picked my last red rose of summer to go with her dress. 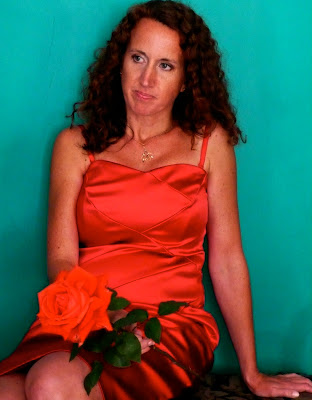