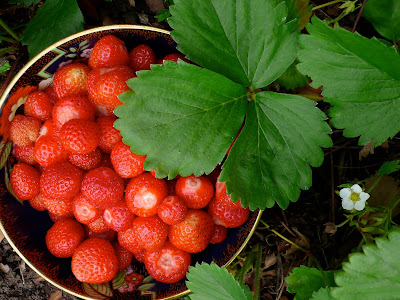 We are gorging on strawberries and the blackbirds are doing their best to match our consumption. I have been making Eton Mess; crumbled meringue, whipped double cream and a generous amount of cut strawberries, gently combined - indulgence in a dish! 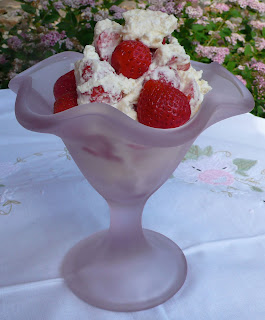 Just as we become tired of picking and eating them, the crop comes to an end and the raspberries take over. Raspberries are an obliging fruit, they don't involve so much bending and they freeze well.
My parents grew copious amounts of raspberries which my mother made into jam. The canes had been ordered from Scotland and were excellent stock. They were planted in a far corner of the garden, beyond the orchard and left to grow into a veritable jungle. In summer I would come home from school to an empty house and know that my  diminutive mother, all five foot four inches of her, would be out there somewhere, hidden among the fruit canes, happily picking away.
I used to go each year to the fields in Cheddar and help to pick strawberries to sell at the junior school fete. One year I took my small daughter to 'help'. She started the morning neatly dressed but it was so hot on the south-sloping fields that after a while she took off her dress and picked fruit in her white cotton vest and pants. When we had filled a sufficient number of trays we took them to be weighed. I think that my daughter must have eaten more fruit than she had picked because the front of her vest was completely stained with juice. We were quite relieved that they chose not to weigh her! 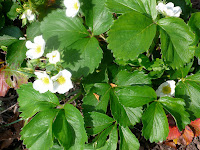 The year that I was pregnant for the second time I was excused strawberry picking duties but my friend Audrey brought  a large bowl of fruit from the fields for us to enjoy. They were delicious. I ate too many and got stomach ache. Really! Stomach ache? Oh, no, they were contractions.  Daughter number two was born a few hours later. 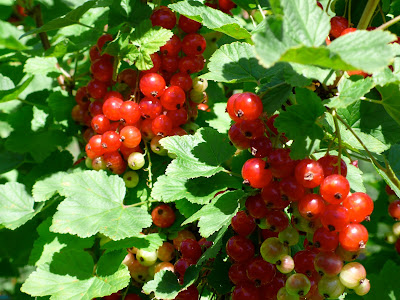 July.
It is July
the blackbirds cry,
"Open the fruit cage, we have eaten well."
The currants swell.
I mend the net
and yet the sparrows say,
"Open the cage, we've eaten all we want today."
Redcurrants hang like jewels from their stalks
and small birds watch their ripening like hawks.
Blackcurrant berries glistening like jet
are well caged in
and yet,
and yet,
those blasted birds are somehow in the cage
and won't stay out, however much I rage.
Posted by Share my Garden at 12:46