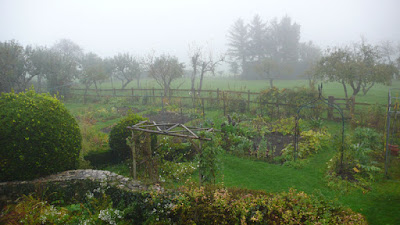 When it is as damp and dreary as this it is time to turn the heat up on the Aga and do some baking. I'd bought a pineapple but didn't fancy eating it cold. We have entered the time of year when thoughts turn to hot, comforting food, to stews, warm puddings and custard. I looked out an old recipe for pineapple upside down cake. A daughter phoned. "I've just got to take a cake out of the oven" I told her. She wanted to know which recipe. "How retro!" was her response. She's right, of course, I don't think I've used this recipe since the sixties. The first thing that I noticed was how much sugar was in the recipe and that a can of pineapple was specified rather than fresh. In Britain in the sixties you couldn't always rely on being able to buy a fresh pineapple that tasted of anything, they could be an expensive waste of money. The finished cake, however, did look more decorative with its circles and semi-circles of fruit than my random chunks. I cut back on the sugar and threw in a few dried cranberries. We ate a slice warm with custard for lunch and another piece cold later on with a cup of tea.

I miss our former neighbour, Sally, but we keep in touch via email.  I sent her a photo of the next upside down cake to come out of the oven,  as many pears as possible crammed into chocolate cake. That's my crop of pears from the garden dealt with for another year. She sent a reply, "at first glance I thought you'd sent me a cross section of the brain!" She and her husband run a busy veterinary practise. She's obviously working too hard! 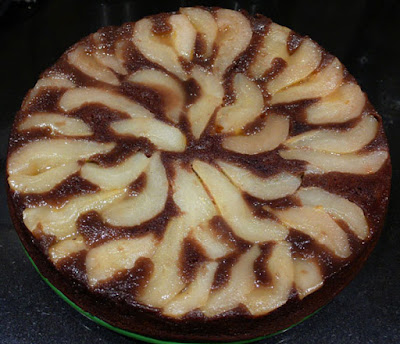 If it clears up a little I'll pull on my wellies and waterproofs and have a short walk. 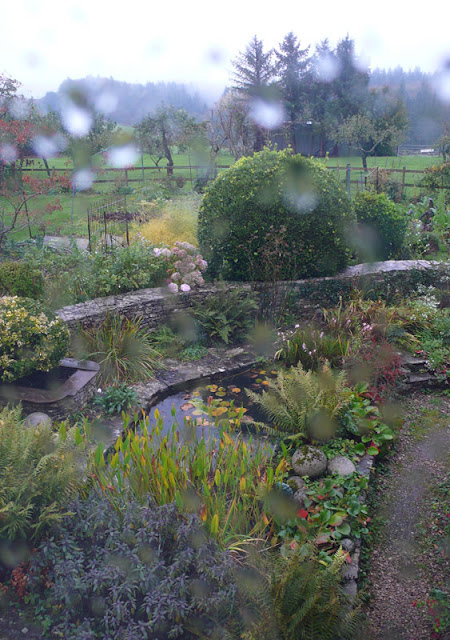