We're in North Yorkshire, back 'home' for a couple of weeks. It's a six hour journey door to door and I no longer spring out of the car when we arrive. The bones and muscles of my body respond very grudgingly and I hobble, stiff and bent to open the garden gate. But it's good to be here. We set to work lighting the wood burner and turn on the water supply to fill the tank. While we wait for the stove to build up some heat we put on our hiking boots and head out of the village and along the road that becomes a track leading on to the moor tops. My family have walked this path for many years, it was my father's daily stroll, always with a dog by his side, Tess, our much-loved Dobermann, then an assortment of terriers and lastly Meg, the faithful old spaniel who outlived him. 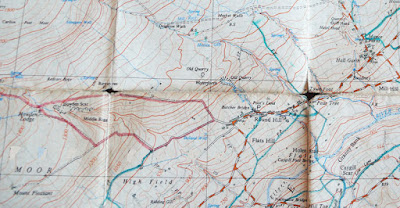 It is wonderful walking country, the Yorkshire Dales are criss-crossed with roads and trackways. The paths have a long history, some dating from when prehistoric man first settled on these limestone uplands. The entire area bears the marks of previous generations, from Roman roads to the tracks and pathways that were the communication lines between settlements of Angles, Danes and Norseman. The Normans introduced castles and monasteries to the area and routes were created to link their estates.  Packhorse tracks and drover's roads were followed by routes for the new industries of lead and coal mining and of lime burning. It is hard to imagine how busy these paths once were as we walk alone on the moor tops. 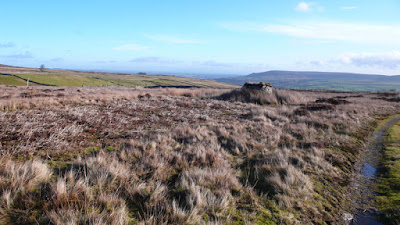 From medieval times up until the eighteenth century long trains of packhorses were common sight in the Dales. The ponies were Galloways, originating from SW Scotland, small and strong, usually brown with black legs. Their load was about 100kg, carried in straw baskets balanced either side of their body. They traveled in a pack of between twenty and forty ponies, the lead pony wearing a bell to announce their approach. The packhorse bridges over the steams and waterways have low sides so that they don't obstruct the side-slung panniers.
The drover's roads were used for driving herds of livestock from one area to another and this took several days. These herds were large, with up to 200 cattle and 2,000 sheep. One drover, with the help of his dogs, would be responsible for no more than 50 cattle and 500 sheep. The dogs must have been characters because when they had ferried their herd to its destination the drover stayed to complete the sales while the dogs took themselves home, stopping at the same places overnight en route!
The droving roads were wider than the packhorse tracks and cattle driven down from Scotland were able to walk three abreast. With the enclosure act from the late 1700's these roads were walled and now survive as green lanes. They are a joy to walk along. 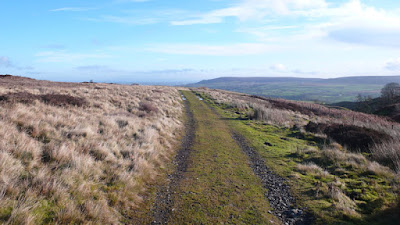 Flocks of geese were also driven, but not far, only from one dale to the next on their way to market.
Apart from a local farmer we have seen no-one on our walk, although someone on horseback has been before us. No sign of the rider, only the marks of hoof prints pressed crisply into the turf underfoot. 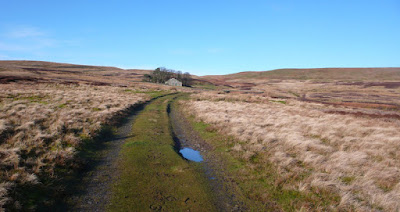 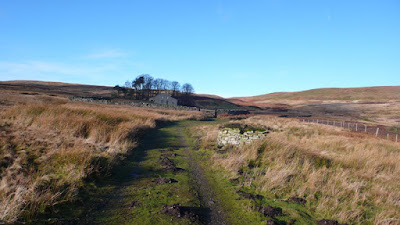 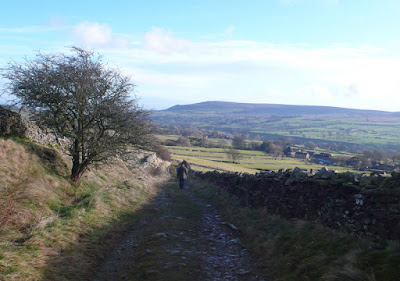