Apparently the most depressing day of the year is today, January 16th, known as, 'Blue Monday.' Mental Health Research UK wants to rename it, 'Blooming Monday' and is encouraging everyone to share pictures of themselves in brightly coloured clothing. I've just walked down the road to the postbox and have to say that the weather isn't helping, it's anything but bright and inspiring; the landscape is grey, the fine rain drenching. I'm living in roll-neck sweaters and woolly socks and forgive me for sounding like a grouch, but January and February are the months when I could happily hibernate.

Our e-mail system stopped working at Christmas and we were out of communication for weeks. Friends phoned to say that they couldn't make contact. We've just discovered why, our provider went bankrupt! E-mail is so immediate, ideal for those silly, short exchanges with friends and family that make you smile and equally good for lengthy catch-ups and an exchange of photographs with those who now live far away.
The art of letter writing, it seems, is dead.

Mt mother wrote wonderful letters, full of the routine of her daily life. She would describe a blackbird singing outside the kitchen window and what she had baked that was going to be eaten for tea. Her writing would transport me straight back home. I was also a letter writer, often adding drawings to accompany whatever I was writing about. One day I received a reply from a friend. She had made, as a heading, a carefully detailed pen drawing of a town crier in a feathered hat. He was ringing a hand bell as he read out a notice, proclaiming, 'Such is the letter that Rosemary writes and so do I....' 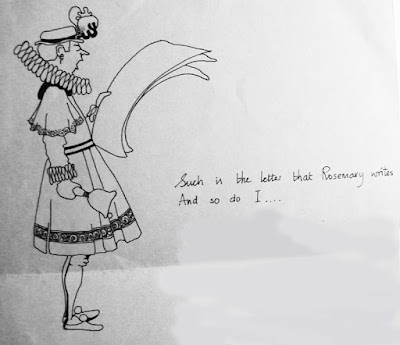 Throughout my childhood a single house telephone was our connection to the outside world and its four-digit number is embedded in my memory. The phone was positioned in the hall at the foot of the stairs and was used for my father's business as well as for family calls. A pad and pencil were set out on the table so that important customer details could be written down. Unfortunately I was a doodler. When friends rang to chat I would pick up the pencil and doodle on the pad. Loops and lines grew and connected the letters and numerals in an intricate web. I was totally unaware that I was doodling. If Dad was in the sitting room and I had been talking on the phone for some time he would know that his business messages were in the process of being obliterated. "Rosemary!" he would bellow, "Get off the phone!"

I like the feel of a pencil in my hand and have drawn and written since childhood, both for my own pleasure and for my career. I think of a pencil as a magical tool, able to record fact, create fiction and make imaginary figures that can, with just a few small marks, smile back at me from the page.
I've just finished writing my first novel and when I started I wrote in pencil, only later transferring what I had written onto the computer. At some point, I can't recall exactly when, perhaps during the editing process, the pencil became redundant and I wrote straight onto the screen.

Do I still doodle? I went and looked at the telephone pad in the hall. Pristine! Well, I'll go to the foot of our stairs! How strange. Did I stop doodling at the start of the digital age?
Dad would be pleased! 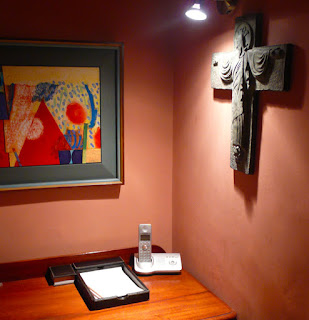