The weather is 'wuthering', wind howling through the trees and making the telephone wires dance erratically. Yesterday, just after lunch the electricity failed. We checked our fuse box but nothing had tripped. As darkness fell it became evident that the whole dale was without power. Candles were lit. When it was time to eat I let the wood in the sitting room stove burn down to red embers and knocked up a meal in the frying pan. "Very Emily Bronte" said Himself. It tasted delicious - those girl guide skills come in handy!
Today the wind is still blowing. We avoided the tops, walking instead across the field paths down to the river. 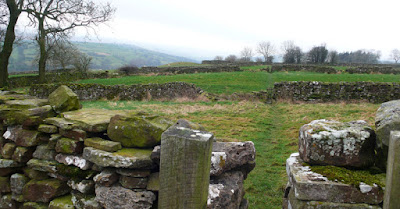 Our old ordnance survey map,  two and a half inches to the mile, is falling to bits and in need of replacement. We've highlighted the footpaths in green and the bridleways in red. The green lines radiate out from the village, old walkways that link the nearby hamlets. These paths serve different needs. One goes straight up the hill to the peat moor. All the villagers have rights to cut peat for their fires, although none do so now. 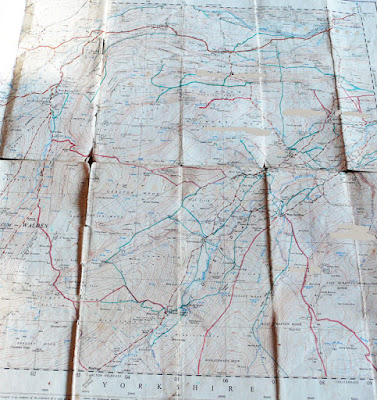 As we near the river the walls contain rounded stones, taken, I imagine, from the river bed. 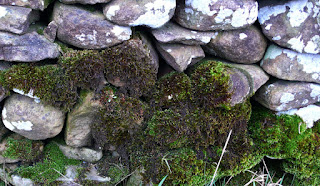 The council have been at work repairing the bridge. But what vandalism! The flat stones that used to cap the bridge have been removed and replaced with new. 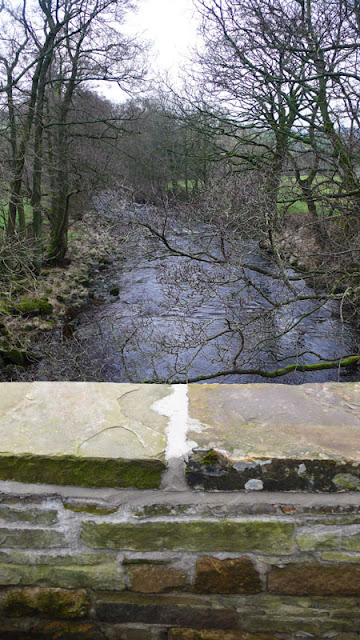 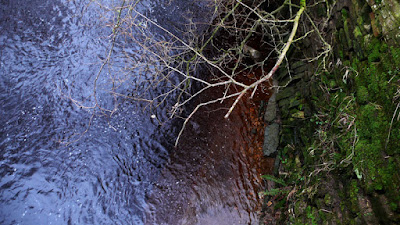 The old stones were carved with the names and dates of local folk. We would study them with interest, running our fingers in the shallow, mossy indentations. No marks remaining of these Dales folk now, another bit of history gone.
We walk up by the road, heads bent against the wind and my body starts to ache. It isn't a stitch, it's my gall bladder complaining. Last nights fry-up, that crispy slice of fried bread - there's a price for everything!
Posted by Share my Garden at 00:49